Home / Evenementen / A royal Christmas with Anne of Hannover

The highly musical Anne of Hannover was born the second daughter of George II, the future King of England. During her childhood in London, she received harpsichord and theory lessons from none other than Handel. Her marriage to Prince William IV of Orange-Nassau brought her to the Netherlands, where she lived for a long time in the ‘Stadhouderlijk Hof’ in Leeuwarden. Here, she requested Jean Marie Leclair to come over from Paris to teach her. Frederick II of Prussia (the Great) was her pen pal and came to Soestdijk Palace to play music with her.
Anne’s keen artistic insight and qualities made a deep impression on the three gentlemen: she sang, played the harpsichord, flute, composed and painted. She also advised her husband Willem IV on state affairs and took over his duties as regent after his death. Both Händel and Leclair dedicated compositions to her and through Frederick the Great she came into contact with the works of J.S. Bach.
In honor of this remarkable woman and also to ring in the new year, the Apollo Ensemble will play a New Year’s concert on 1 January that could have been devised by Anna van Hannover herself.

We wish you all a very happy New Year and hope to see you again at our concerts. 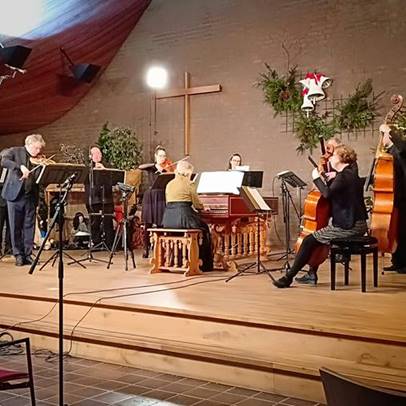