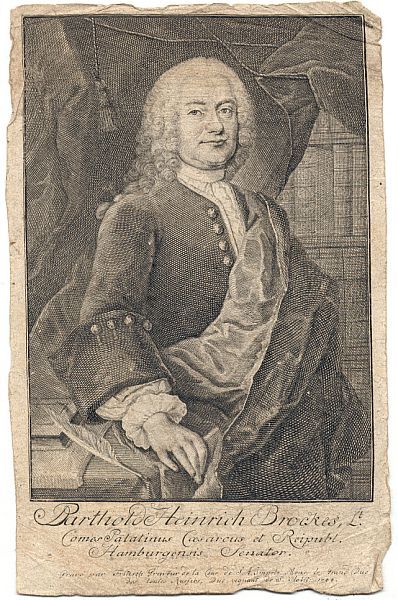 When Barthold Heinrich Brockes turned his hand to writing a Passion oratorio in 1712, he was not known as a poet. The Hamburg native, son of a leading businessman, had studied law in Halle at the turn of the eighteenth century, where he first met the young Georg Friedrich Händel. Like many wealthy young men of his time, Brockes then embarked on a Grand Tour of Switzerland, Italy, and France, before arriving in Leiden to finish his law studies. He received the licentiaat in 1704 and promptly returned to Hamburg—but not to practice law. Independently wealthy after the death of his father, he turned his attention to cultivating a place amongst the elites of Hamburg, giving weekly concerts in his enormous house. Brockes’s house concerts gave him the opportunity to meet local musical celebrities like composer and Hamburg city music director Reinhard Keiser, as well as the two best-known performers of the Hamburg opera orchestra, Händel and Johann Mattheson.

Perhaps it was these connections that inspired Brockes to turn his hand to writing poetry intended for musical setting. His very first effort along these lines was the oratorio Der für die Sunden der Welt gemarterte und sterbende Jesus, one of the earliest German-language Passion oratorios, and by far the most popular text in the genre of its time. By the late eighteenth century, the text had been set in full or in part by at least eleven different composers, including Keiser (the first setting, in 1712), Händel (1716), Georg Philipp Telemann (1716), and Mattheson (1719). No doubt Brockes’s own fame and social connections had much to do with the popularity of the text.

It is perhaps the personal connection with Brockes that Händel forged from an early age that inspired the composer to write his Brockespassion, the composer’s only sacred work on a German text. Given that Mattheson later reported that Händel had written the oratorio in London in the summer of 1716 and then sent it to Hamburg by post, it is possible that Händel’s friends in Hamburg had asked him to write it. Evidence regarding the first performances of the work is scarce: perhaps, like Keiser’s setting, it was given a private premiere in Brockes’s home; surely it was performed in Hamburg in 1719 as part of a Brockespassion festival organized by Mattheson. Today, Händel’s setting is the best-known of all—except for the few numbers included by Bach in his Johannespassion.

With the form below you can respond to this Brockeswijzer