The Apollo Ensemble is like a chameleon. One time they form a fully-fledged baroque orchestra, the next they perform just as easily as a duo, trio or septet. Whatever formation the ensemble chooses, its musicians are always driven by a common passion and the wonder that they can make age-old music sound fresh and brand new. They think there is nothing more beautiful and rewarding than sharing this fascination with their audiences. So, welcome to the Apollo Ensemble!

The Apollo Ensemble consists of top musicians from all parts of the world and is based in the Netherlands. The internationally leading music company, which performs in different settings, plays music from early Baroque to early Romanticism. It has played on major stages and festivals, touring countries like Australia, Russia, Brazil, France, Germany, Croatia and the United States. On the occasion of their 25th anniversary, the Apollo Ensemble recently released the CD ‘Het Hoofd van Haydn’ (‘Haydn’s head’).

The album was released in combination with the novel of the same title by Theun de Vries, which was republished especially for this occasion.
In March / April 2019, the Apollo Ensemble performed the Brockes Passion by Telemann. Together with the Cantatrix choir, they also played the St Matthew Passion by J.S.Bach, which deeply impressed the Dutch press and audiences throughout the country.

The Apollo Ensemble researches and plays repertoire from a period spanning more than three centuries, from around 1600 to 1930, a period running from the Baroque, Classical and Romantic periods well into the early 20th century.
Because the size of the ensemble tends to vary considerably, the repertoire is unprecedentedly wide and versatile. In addition, the variation in the line-up can also add variation and extra color to concert programs. After all, there are not many programs that offer a symphony and a trio sonata in succession.

The ensemble choses to play authentic instruments and uses historically informed playing techniques out of conviction, to get as close as possible to the intentions and sound world of the old masters. The musicians of the Apollo Ensemble see themselves as the ambassadors of Bach, Handel, Haydn and Mozart.

The Apollo Ensemble is an international company, the musicians come from all over the world. Artistic leader is the Ukrainian-born violinist David Rabinovich, who has more than earned his international reputation and has been a prominent member of the Amsterdam Baroque Orchestra for seventeen years (Ton Koopman).

The ensemble wants to embark on a voyage of discovery with their audience and engage in a dialogue. This is a highly personal approach, which makes the musical experience a lasting one. There is time to meet the ensemble before or after concerts and their newsletters keep you informed of their activities. Apollo believes in sharing their experiences and enthusiasm.

Inspired by the Greek god Apollo leading his nine muses, each with her own attributes, the Apollo Ensemble wants to be the ‘dome’ that harbors various musical activities with a logical and organic coherence.
The Apollo Summer Academy is the ensemble’s annual anchor point. This international course of chamber music is preceded by a broadly oriented festival, Festival Via Musica. This festival revolves around music from the 17th to 21st centuries, with a different theme being chosen every year. Apollo also organizes the annual Lelystad Composer Days, with each edition dedicated to a different composer.

The Apollo Ensemble is firmly anchored in the Dutch province of Flevoland, but sees the whole world as its stage. The ensemble performs in the larger Dutch concert halls, such as the Amsterdam Concertgebouw, but also plays at smaller and more intimate venues.
Concert tours took the musicians to Russia, Croatia, France, Germany, Brazil, Canada, Australia and the United States. In 2009, 2013 and 2014 the group visited Washington (Kennedy Center) and the Sydney Festival, with a special program dedicated to Jewish Baroque music. In 2019 Apollo performed at the big Handel Festival in Halle (Germany).

The American label Centaur Records has contracted the Apollo Ensemble for their CD recordings. So far, 18 albums have been released that were received with critical acclaim by the music press. “It is a pleasure to listen to this duo,” wrote Marcel Bijlo, about the Sonatas for violin and obbligato harpsichord by J.S. Bach. 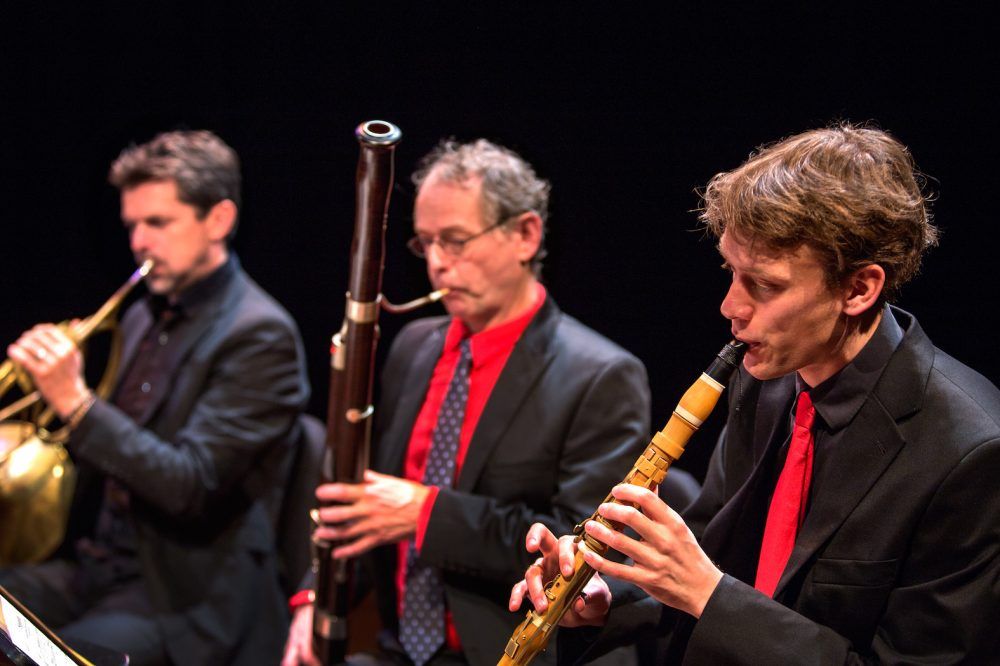